By Rohandeep Arora
Outside the Sikh Gurudwara in Richmond Hill, Queens, I approached an older Sikh man with a turban and a long, flowing beard. “Hello, Uncle!” I said in Punjabi, my mother tongue. “Do you have a couple of spare minutes to fill out a survey on our research for the needs of the South Asian seniors?” “Sure, beta,” he said. He was very pleased to help me out and patiently answered my questions. It was very hot day, and after a while, he invited to his home which was two blocks down from where we were for a cold drink. He sent me on my way with best wishes for my future.

This experience was just one of many similar encounters I and my fellow interns had this summer as we helped gather data for the first ever needs assessment of South Asian seniors in New York City. We were working with India Home, the only professionally staffed nonprofit in the North East that serves South Asian elders, to gather information on a wide range of issues that confront immigrant South Asian seniors. 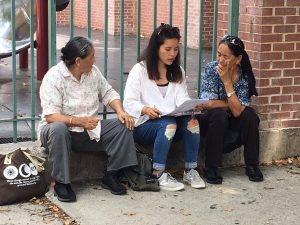 India Home’s interns fanned out across Queens to interview South Asian elders for a new Needs Assessment Survey this summer. Tenzin is talking to two seniors.

My fellow hardworking interns, Tenzin, Zarifa, Daiyan, Sanjana, Amna and I helped India Home to survey the needs of South Asian seniors in areas of New York City that have high populations of South Asian immigrants like Queens, Brooklyn, and the Bronx. Our goal was to understand the requirements of these seniors and make them feel comfortable enough to answer our questions. We surveyed senior citizens who have immigrated from India, Bangladesh, Pakistan, Nepal, Guyana, Sri Lanka, Afghanistan, and other South Asian countries. We visited temples, mosques, gurudwaras, churches, senior centers, and spent time in parks and streets in order to gather legitimate data for the needs assessment research.

Interns who spoke the languages of South Asia 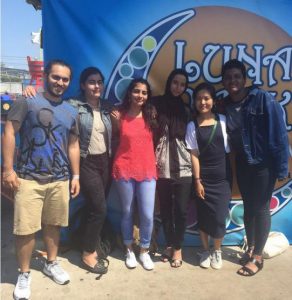 Many older adults from South Asia have little or no English proficiency which makes it difficult for them to communicate in this country. That is why our abilities in multiple languages paid off when we encountered elders who were not proficient in English. My team and I did not face any problems in talking to elders and translating the surveys to them. Even those seniors who could speak some English were happy to have us approach them in their native tongue.

“Quite a few seniors have adjusted themselves to the city’s lifestyle but still miss the friendliness and warm community relationships in their native lands. Most of them get very excited when we approach the seniors with their mother tongue and are pleased to help us by participating in the survey,” said Tenzin Lama.

Even though we came from different backgrounds and cultures, we enjoyed each other’s company, whether we were working or taking a day off to enjoy the summer in NYC.

What is the survey about?
“What is the survey about” was the very first question the elders invariably asked us. We would tell them that the survey asked detailed questions related to the lifestyle of South Asian seniors, like marital status, age, year of immigration, a reason of immigration, income, housing status, health related questions, social security income and much more. “The surveys are anonymous and records no personal information of the respondents,” we would reassure them. 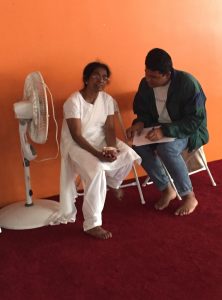 We made sure our elder participants in the Needs Assessment Survey were comfortable. Daiyan is interviewing a senior.

Challenges in the Field
One of the biggest challenge we faced was convincing the seniors we met that taking the survey would not harm them in any way. Despite repeated assurances that their responses were anonymous, many elder respondents were scared. Some were undocumented or had a distrust of government. The lack of literacy among immigrant seniors was also reason why it was hard for our interns to persuade elders to take the survey. However, we were trained to combat this distrust and fear. For instance, our team was trained to greet elders appropriately and with respect according to the cultural norms of their respective cultures. Thus we would fold our hands in a namaste while approaching Indian elders or say tashi delek to greet Tibetan elders.

I like to think that our cultural competence helped to put the elders at ease. “Sometimes elders need that support from someone to move on from a tragedy or depression if they have any. Sometimes they want to share some tragic experience,” Sanjana said.

The other thing we did well was listen – sometimes to much more than just answers to our questions. “Most of the senior citizens we surveyed were very friendly and warm. I think they tend to feel lonely when their families aren’t home which makes the seniors more than happy to communicate and share their experiences with someone” said Sanjana.

Funding for the needs assessment was generously provided by New York Community Trust and SAALT We Build Community.