Last year, Narendra Butala, a long time member of India Home, was facing a health crisis. He had been feeling breathless for a while. His blood pressure would drop suddenly and he would sweat profusely.

Still, he was afraid to go to the cardiologist because his brother had got a pacemaker in 2004 and had passed away shortly after. Even as he worried about the condition of his heart, he heard from one of his relatives. Pacemaker technology had changed, she said, and urged him to get a check-up. Finally, in July, a few months after his 78th birthday, Butala, took the plunge and went to Mount Sinai Hospital in New York City, and got a pacemaker inserted. “I was home after two hours,” he said. “They monitor my heart from the hospital, remotely.” 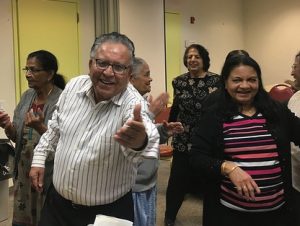 South Asian seniors like Mr. Narendra Butala (left) will benefit from a new bill introduced by Rep. Pramila Jayapal that targets heart health in the community

Mr. Butala, who emigrated from India 20 years ago, lives an active lifestyle, and is a life-long vegetarian who doesn’t smoke. At first glance, he would not appear to be a typical candidate for heart disease. However, there is one indicator that increases his risk exponentially – his South Asian descent. Several recent studies have found that all over the world, individuals of South Asian descent account for 60 percent of heart disease patients. A study conducted by the University of California San Francisco found that in the United States, South Asians have the highest death rate from heart disease compared to other ethnic groups. Other research published in the Annals of Internal Medicine, discovered an even more troubling trend. Among people of normal BMI (Body Mass Index), South Asians were twice as likely as whites to have risk factors for heart disease.

BMI, a height-to-weight ratio, is used to determine whether someone is overweight or obese. Body Mass Index and weight are often the first numbers doctors consider. Many doctors may not screen for heart disease and Type 2 diabetes if they are within normal range, but what the study indicated was that when it came to South Asians, even patients of normal weight were showing risk factors for heart disease.

Fortunately, someone in the federal government has been paying attention to these concerning numbers. Representative Pramila Jayapal (D-Washington) introduced in the House in late July a bill aimed at the issue of high levels of heart disease in the South Asian American community. Called the “South Asian Heart Health Awareness and Research Act,” the bill garnered bipartisan support and was co-sponsored by 18 other members of Congress, including Rep. Joe Wilson (R-South Carolina).

In an email to NBC News, Jayapal said that she introduced the bill because she thinks the US, needs, “to take action by expanding funding for research and spreading awareness targeting [these] communities. We’ll save lives and reach a better understanding of heart health that will benefit all Americans.” 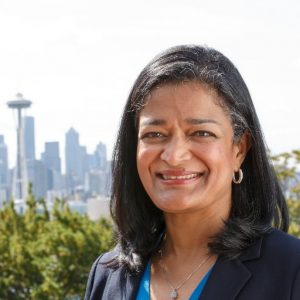 NBC News reported that the bill would “establish grants at the Centers for Disease Control and the National Institutes of Health to provide information about heart health to South Asian-American communities and fund medical research on cardiovascular disease in South Asians in the U.S. The bill would also fund grants through the U.S. Department of Agriculture for the promotion of better South Asian heart health nutrition.”

India Home, which runs the largest South Asian senior center in the North-East, has made its own modest contribution to improve heart health among the older South Asian adults it serves. Regular yoga, meditation and Ayurveda is taught at its centers along with holistic and healthful ways to exercise and maintain their physical and mental wellness. Moreover, in partnership with NYU Langone’s Center for the Study of Asian American Health (CSAAH), India Home has introduced its members to a number of educational projects like Keep On Track / REACH FAR. 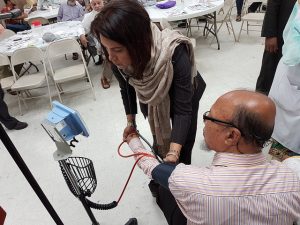 This project trained 26 volunteers at India Home to monitor blood pressure as part of a Community Health Assessment. Over 80 Bengali seniors from India Home’s Desi Senior Center participated in the project. Another project helped to disseminate nutrition information with culturally and linguistically adapted brochures in Bengali and Hindi and taught seniors how to measure their food portions and try new nutrition strategies.

As for Mr. Butala, he’s back at India Home’s Sunnyside center, being the first to volunteer to push the lunch cart, as usual. “I’m feeling fine,” he said the other day. “The doctor said I can do all activities.”